Surprisingly as it may seem, it isn’t capacity that explains the differences that exist between individuals because most seem to have far more capacity than they will ever use.  The differences that exist between individuals seem to be related to something else.  The ones who achieve and outperform others seem to have within themselves the ability to use hidden resources.  In other words, it’s what they are able to do with what they have that makes the difference.

In many animal breeding programs, the entire process of selection and management is founded on the belief that performance is inherited.  Attempts to analyze the genetics of performance in a systematic way have involved some distinguished names such as Charles Darw

in and Francis Galton.  But it has only been in recent decades that good estimates of heritability of performance have been based on adequate data. Cunningham (1991) in his study of horses, found that only by using Timeform data, and measuring groups of half brothers and half sisters could good estimates of performance be determined.  His data shows that performance for speed is about 35% heritable.  In other words, only about 35% of all the variation that is observed in track performance is controlled by heritable factors, the remaining 65% is attributable to other influences, such as training, management and nutrition.  Cunningham’s work while limited to horses, provides a good basis for understanding how much breeders can attribute to the genetics and the pedigrees.

Researchers have studied the phenomena and have looked for new ways to stimulate individuals in order to improve their natural abilities.  Some of the methods discovered have produced life long lasting effects.  Today many of the differences between individuals can now be explained by the use of early stimulation methods.  Man for centuries has tried various methods to improve performance.  Some of the methods have stood the test of time, others have not.  Those who first conducted research on this topic believe that the period of early age was a most important time for stimulation because of its rapid growth and development.  Today, we know that early life is a time when the physical immaturity of an organism is susceptible and responsive to a restricted but important class of stimuli.  Because of its importance, many studies have focused their efforts on the first few months of life.

Newborn Pups  are uniquely different from adults in several respects.  When born, their eyes are closed and their digestive system has a limited capacity requiring periodic stimulation by their dam who routinely licks them in order to promote digestion.  At this age, they are only able to smell, suck and crawl.  Body temperature is maintained by snuggling close to their mother or by crawling into piles with other litter mates.  During these first few weeks of immobility, researchers noted that these immature and under-developed canines are sensitive to a restricted class of stimuli which includes thermal and tactile stimulation, motion and locomotion.

Other mammals such as mice and rats are also born with limitations, and they also have been found to demonstrate similar sensitivities to the effects of early stimulation.  Studies show that removing them from their nest for three minutes each day during the first five to ten days of life causes body temperatures to fall below normal.  This mild form of stress is sufficient to stimulate hormonal, adrenal and pituitary systems.  When tested later as adults, these same animals were better able to withstand stress than littermates who were not exposed to the same early stress exercises.  As adults, they responded to stress in ‘a graded’ fashion, while their non-stressed littermates responded in an ‘all or nothing way.’

Data involving laboratory mice and rats also show that stress in small amounts can produce adults who respond maximally.  On the other hand, the results gathered from the non-stressed litter-mate show that they become easily exhausted and are near death if exposed to intense prolonged stress.  When tied down so the are unable to move for 24 hours, rats developed severe stomach ulcers, but litermates exposed to early stress handling were found to be more resistant to stress tests and did not show evidence of ulcers.  A secondary effect was also noticed.

Sexually maturity was attained sooner in the litter mates given stress exercises.  When tested for differences in health and disease, the stressed animals were found to be more resistant to certain forms of cancer and infectious diseases and could withstand terminal starvation and exposure to cold for longer periods than their non-stressed littermates.

Other studies involving early stimulation exercises have been successfully performed on both cats and dogs.  In these studies, the Electrical Electroencephalogram (EEG) was found to be ideal for measuring the electrical activity in the brain because of its extreme sensitivity to changes in excitement, emotional stress, muscle tension, changes in oxygen and breathing.  EEG measures show that pups and kittens when given early stimulation exercises mature at faster rates and perform better in certain problem-solving tests than non-stimulated mates.

In the higher level animals, the effect of early stimulation exercises has also been studied.  The use of surrogate mothers and familiar objects were tested by both of the Kelloggs and Dr. Yearkes using young chimpanzees.  Their pioneer research shows that the more primates were deprived of stimulation and interaction during early development, the less able they were to cope, adjust and later adapt to situations as adults.

While experiments have not yet produced specific information about the optimal amounts of stress needed to make young animals psychologically or physiologically superior, researchers agree that stress has value.  What also is known is that a certain amount of stress for one may be too intense for another and that too much stress can retard development.  The results show that early stimulation exercises can have positive results but must be used with caution.  In other words, too much stress can cause pathological adversities rather than physical or psychological superiority. 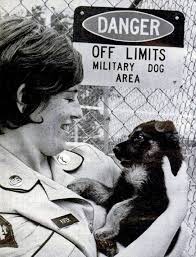 The US Military in their canine program developed a method that still serves as a guide to what works.  In an effort to improve the performance of dogs used for military purposes, a program called ‘Bio Sensor’ was developed.  Later it became known to the public as the ‘Super Dog’ program.  Based on years of research, the military learned that early neurological stimulation exercises could have important and lasting effects.  Their studies confirmed that there are specific time periods early in life when neurological stimulation has optimum results. The first period involves a window of time that begins on the third day of life and last until the sixteenth day. It is believed that because this interval of time is a period of rapid neurological growth and development and therefore is one of the great importance to the individual.

The Bio Sensor program was also concerned with early neurological stimulation in order to give the dog a superior advantage.  Its development utilized six exercises which were designed to stimulate the neurological system.  Each workout involved handling puppies once each day.  The workouts require the handling them one at a time while performing a series of five exercises.  The handler completes the series from beginning to end before starting with the next pup.

The handling of each pup once per day involves the following exercises. 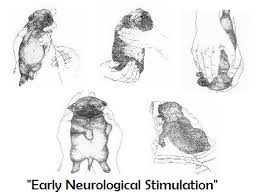 1.  Tactical stimulation (between the toes) holding the pup in one hand, the handler gently stimulates (tickles) the pup between the toes on any one foot using a Q-tip.  It is not necessary to see that the pup is feeling the tickle.   Time of stimulation 3-5 seconds.

2.   Head held erect: using both bands, the pup is held perpendicular to the ground, (straight up) so that its head is directly above its tail.  This is an upwards position.  Time of stimulation 3-5 seconds.

3   Head pointed down: Holding the pup firmly with both hands the head is reversed and is pointed downward so that it is pointing towards the ground.  Time of stimulation 3-5 seconds

4  Supine position:  Hold the pup so that its back is resting in the palm of both hands with it muzzle facing the dialing.  The pup while on its back is allowed to sleep.   Time of stimulation 3-5 seconds

5   Thermal stimulation: use a damp towel that has been cooled in a refrigerator for at least 5 minutes.  Place the pup on the towel feet down.  Do not restrain it from moving.  Time of stimulation 3-5 seconds.

These five exercises will produce neurological stimulations, none of which naturally occur during this early period of life.  Experience shows that sometimes pups will resist these exercises, others will appear unconquered.  In either case, a caution is offered to those who plan to use them.  Do not repeat more than once per day and do not extend the time beyond that recommended for each exercise.  Over stimulation of the neurological system can have adverse and detrimental results.  These exercises impact the neurological system by kicking it into action earlier than would be normally expected.  The result being an increased capacity that later will help to make the difference in its performance.  Those who play with their pups and routinely handle them should continue to do so because the neurological exercises are not substitutes ions for routine handling, play socialization or bonding.

Five benefits have been observed in canines that were exposed to the Bio Sensor stimulation exercises.  The benefits noted were:

In tests of learning, stimulated pups were found to be more active and were more exploratory than their non-stimulated littermates over which they were dominant in competitive situations.

As each animal grows and develops,  three kinds of simulation have been identified that impact and influence how it will develop and be shaped as an individual.  The first stage is called early neurological stimulation and the second stage is called socialization.

Regular trips to the park, shopping chanters and obedience and agility classes serve as good examples of enrichment activities.  Chasing and retrieving a ball on the surface seems to be enriching because it provides exercise and includes rewards while repeated attempts to retrieve a ball provide physical activities, it should not be confused with enrichment exercises.  Such playful activities should be used for exercise and play or as a reward after returning from a trip or training session.  Road work and chasing balls are not substitutions for interaction and investigation.

Finally, it seems clear that stress early in life can produce beneficial results.   The danger seems to be in not knowing where the thresholds are for over and under stimulation.  The absence or the lack of adequate amounts of the performance of most individuals can be improved, including the techniques described above.  Each contributes in a cumulative way and supports the next stage of development.

Conclusion:  Breeders can now take advantage of the information available to improve and enhance performance.  Generally, genetics account for about 35% of the performance, but the remaining 65% (management, training, nutrition) can make the different.  In the management category, it has been shown that breeders should be guided by the rule that it is generally considered prudent to guard against under and over stimulation.  Short of ignoring pups during their first two months of life, a conservative approach would be exposed the to children, people, toys, and other animals on a regular basis.  Handling and touching all parts of their anatomy is also a necessary part of their learning which can be started as early as the third day of life.  Pups that are handled early and on a regular basis generally do not become hand-shy adults.